ABC Compressors awards a prize to students from Tecnun for the quality of a pneumatics project.

The aim of this collaboration is to encourage the participation of the company in the evaluation of a practice related to its professional activity.

The General Manager of ABC Compressors, Carlos Martín, presented an award to several students of the degrees in Mechanical Engineering e Industrial Design and Product Development Engineering at Tecnun for an automotive project. The prototype of a machine for filling tennis ball cans is designed in two groups by the students of Pneumatics and Oleohydraulics Ander Achucarro, Conchi Alva, Rodrigo Barberena, Álvaro Cano, Markus Mörwald and Janis Kohl as members of the first group and by Telmo Grobas, Santiago Iranzo, Thibault Iste, Daniela Jiménez and Nicolás Lafaverge as members of the second group.

The members of ABC Compressors evaluated the following aspects: originality of the project, presentation, and the answers given by the students to their questions and proposals for improvement. The members of the jury were three managers of the Eibar-based company ABC Compressors. Its General Manager, Carlos Martín; the Technical Manager, Demetrio San Adrián; and the Director of Oil & Gas, Lucio Arizaga. 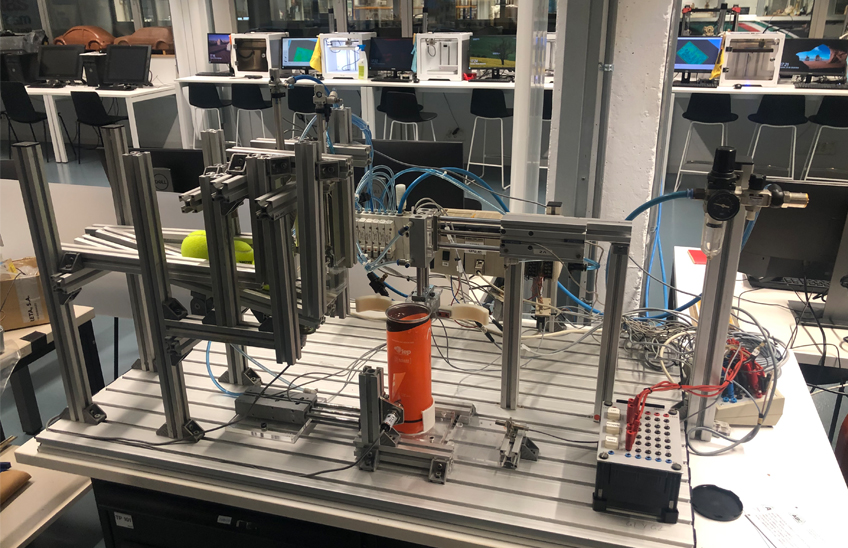 The aim of this initiative is to encourage the participation of the company, which manufactures compressors for the food and petrochemical sectors, in subjects related to its professional activity. "'We want to maintain direct contact with the students at Tecnun. We are interested in them getting to know us because we need to hire engineers as well trained as those at Tecnun", said the General Manager, Carlos Martín. It should be noted that two students from Tecnun have recently joined the Eibar-based company.

"This practice is carried out in a professional context so that students learn to meet different milestones to create a machine with pneumatic technology and have it work," explained Tecnun teacherGorka Sanchez. "The jury members not only evaluate the final result of the work, but also make the students go a little further, asking them: 'what if it fails?'