The students explain how the team has adapted to the development of the single-seater for the next course. PHOTO: Communication Service

The Tecnun Eracing team decided two months ago to take advantage of the mandatory break to give a new impetus to the project, and progress is already bearing fruit. Despite the current situation, the Tecnun eRacing team is moving forward with the same enthusiasm as always. Although the competitions have been cancelled, they are still working on next season's single-seater, the TeR21.

Their development began in September 2019 with a redesign of the suspension geometry and later with the design of a carbon fiber monocoque, the first in the team's history. They were doing all this while working on this year's car, the TeR20. But when the confinement began, efforts focused entirely on the development of the new one.

The work has now been divided, and everyone can work on different aspects of the new vehicle from home. The new way of working and the ingenuity of the team members have opened up new possibilities where previously there were only hints of difficulties.

Working remotely is partly an opportunity. As Aitor Martín, an Industrial Technologies Engineering student, explains, "We are having more free time than usual, which allows us to make group calls on Skype to review designs or hold meetings. Although the current season has come to a halt, we remain positive thanks to all the progress we are managing to make on next year's car".

Aitor also refers to the design phase, which "being longer than usual is allowing us to detect many problems in our designs, which may mean that there are fewer problems once the car has been manufactured".

In any team task, communication and welcoming newcomers is indispensable. As a veteran member, Aitor emphasizes this point: "We are taking the opportunity to document all the design decisions we make so that newer members can understand the process that has been carried out. In this way, the knowledge acquired over the years by the more senior members will stay with the team and allow us to avoid making the same mistakes and move forward in a more agile way. In addition to this, the heads of several areas are giving seminars by videoconference to their members to transmit this knowledge," continues Aitor.

The students of the Tecnun eRacing team know that there are many fronts to get the car up and running. Each one requires a bit of attention to take care of the effort they are undertaking. 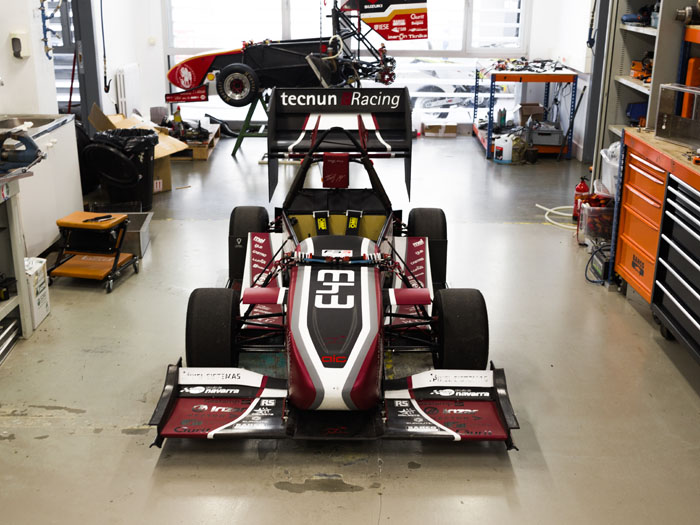 Aitor says that simulations of the suspension kinematics can be performed at home, which allows us to see how the assembly is going to move. This helps to test whether the tires behave as expected, as well as to visualize whether there will be collisions between components. "Once the kinematics are ready, it's time to design the parts that will make up the suspension system." Finally, the students perform finite element simulations to make the part as strong as possible with the minimum amount of material.

During the course, the automotive team conducted an ergonomics study in which they analyzed the most comfortable driving position for the driver. Once defined, they started designing the single-seater around the driver and, finally, they will wrap all the parts that make up the vehicle with the chassis. "This is the first time that a carbon fiber chassis has been designed in the team, which allows us to have more freedom when designing, as well as greater rigidity and a considerable reduction in weight," says Jon Pérez Blanco, an Electrical Engineering student. The members are currently working on designing and simulating the inserts that will transmit the suspension loads to the chassis. "It is a complicated task, but the team is very excited about this project," continues the university student. 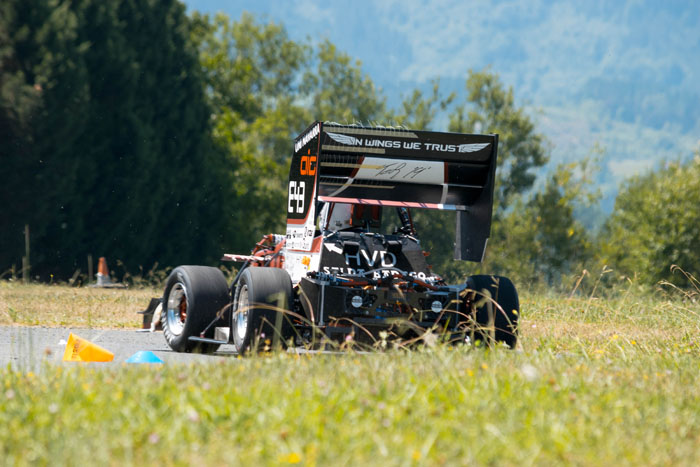 Meanwhile, the aerodynamics department is working to improve the way the car interacts with the air around it. To this end, they are performing CFD simulations by remotely controlling the computers in the automotive laboratory. Their goal is to increase downforce without increasing drag. In addition, they want to improve the simulation process to automate it as much as possible and minimize simulation error.

The quarantine has given the team the opportunity to test, review and document new designs that will improve the vehicle's reliability and performance. In order to be able to work from a distance, the day before the confinement everyone took several tools home, such as oscilloscopes or voltage sources.

Finally, Jon Perez explains that Drivetrain's main objective has been to optimize the cooling of the inverter motors that drive the car: "Based on data from an on-track test, we have sized the cooling circuit to improve its reliability. In addition, we have made efforts to improve the transmission system, so that it works as efficiently as possible while keeping the weight down.

The plan for the return to normality is already starting to gain momentum among the Tecnun eRacing team at Tecnun. Aitor is convinced that "although we are now focused on next year's car, we are not forgetting about the car we will be driving next year".